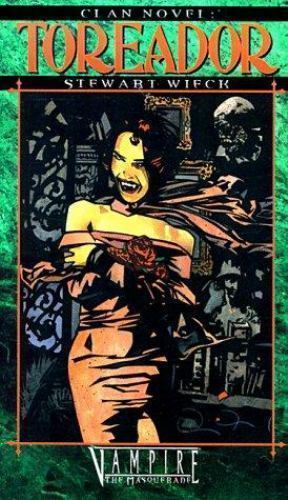 A large number of novels were printed for the Vampire: The Masquerade by various authors during the height of its popularity. The novels all take place in the World of Darkness and feature vampire protagonists as they exist under The Masquerade. The Elders rule as a Decadent Court while Anarchs attempt to overthrow them for their own freedom. Beyond them, the sinister Sabbat threaten to plunge their world into an even darker night.

The most popular of the novel series was the Clan Novels, a thirteen book saga (plus one anthology) that details the invasion of the Sabbat of the Eastern United States as numerous vampires attempt to settle old scores as well as compete for an Artifact of Doom called the Eye of Hazmiel. Other novels include the follow-up trilogies Brujah, Lasombra, and Tremere. These books mostly starred the Signature Characters of the gameline such as Lucita, Anatole, and Hesha.

A similar series to the Clan Novel series was made for Vampire The Dark Ages that detailed all of the clans of that period as well as the Grail Covenant Trilogy by David Niall Wilson. There were several crossover characters from the original Clan Novel series as vampires are, well, immortal.

The books went out of print after the Gehenna event and became collector's items before Onyx Path Publishing began publishing their own World of Darkness anthologies in 2017. In 2019, Crossroad Press would start re-releasing the novels starting with the Clan Novels, Grail Covenant Trilogy, and Dark Age Clan Novels.

open/close all folders
Advertisement:
List of the original novels
List of the new novels
All of the series
Prince Duology
The Clan Novels