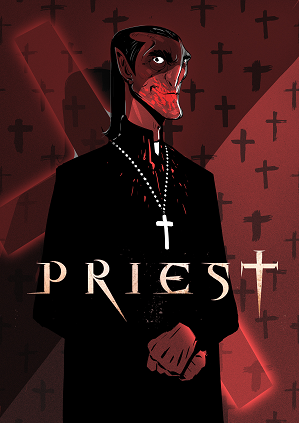 . Used with permission.
"I might be a vampire, but I was raised a good Catholic."
— Raphael Santiago, Shadowhunters
Advertisement:

Everyone knows that vampires and religious artifacts don't get along with each other, particularly crosses. Even though vampire legends exist all around the world (such as the jiang shi from China) with a diversity of weaknesses, this particular association traces all the way back to Eastern European and Slavic superstitions which were influenced by Christianity, and believed crosses, holy water and genuine faith could repel evil spirits and The Undead in general. This in turn served as basis for Bram Stoker's Dracula, the work that popularized vampire fiction.

Occasionally to subvert expectations, some vampires are featured as genuinely religious in spite of their nature or perhaps even part of The Church. Sometimes, this is hand waved by these vampires not being affected by crosses, holy water and the usual suspects which explains why they can carry out their pious duties, but it's not always the case - sometimes they are immune to sunlight too for good measure. Other times they're not immune to the typical vampire weaknesses to crosses and holy water, and simply endure the pain caused by performing their priestly duties because their faith requires it. Possibly as penance for evil they committed before finding God. It's a good opportunity to combine vampires with crosses and other related imagery as they all seem "gothic", specially in Japanese fiction. Christianity is the most common example because of its prevalence in fiction, but any traditional religion can qualify including Crystal Dragon Jesus ones. On the other hand, demonic faiths do not count for this trope, since it's generally assumed that vampires will be inclined towards evil anyways rather than being rejected by it like normal religions. Having said that, this trope covers both good and evil examples: heroic vampires will have a tendency to be self-loathing monsters which is why they seek religion in search for comfort, self-control and/or atonement, while evil vampires qualify as Churchgoing Villains or Sinister Ministers (though pretending to be one doesn't count, they have to believe it).

Compare with Ascended Demon, Real Men Love Jesus and Religious Bruiser. Can be considered a type of Oxymoronic Being.