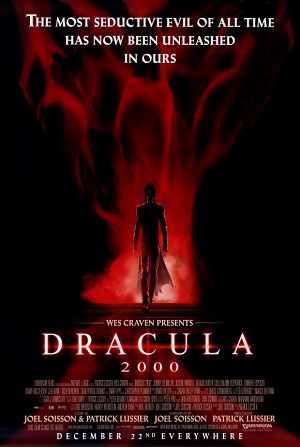 Dracula 2000 is a horror film released in 2000, "presented by" Wes Craven but actually directed by Patrick Lussier, that sees Dracula (Gerard Butler) being awoken by a band of thieves who make off with his coffin. Dracula awakens and causes the thieves' plane to crash in New Orleans, where Mary (Justine Waddell), the daughter of Van Helsing (Christopher Plummer) (who has kept himself alive with Dracula's blood) happens to live.

Has two Direct to Video sequels (which contradict the ending of 2000): Dracula II: Ascension, with Stephen Billington taking over as Dracula and Jason Scott Lee, Roy Scheider, and Khary Payton joining the cast alongside him, and Dracula III: Legacy, where Rutger Hauer played Dracula, with Lee and Schneider reprising their roles.