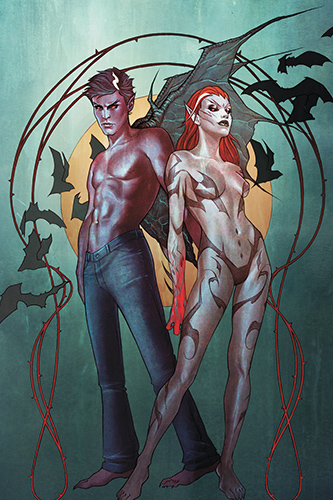 Andrew Bennett is a Vampire desperately in love with his fellow vampire, Mary. Unfortunately, the two have some rather different worldviews. Where Andrew sees humans as people to live in harmony with, Mary sees them as nothing more than food. She styles herself "Mary, Queen of Blood" and begins to build an army of vampires, intent on subjugating the human race and putting vampires in their proper place as rulers of the Earth.

And so Andrew, along with a handful of allies, must stop her.

Part of the New 52, I, Vampire is actually a reboot of a story DC ran in the '80s, as part of House of Mystery. The characters are all younger and better-looking in the new version, and whereas the original was intended as a miniseries, the reboot was an ongoing book. After 20 issues, including a #0 issue, the series was cancelled, though Andrew Bennett made some guest appearances in Justice League Dark afterwards.

I, Vampire provides examples of: