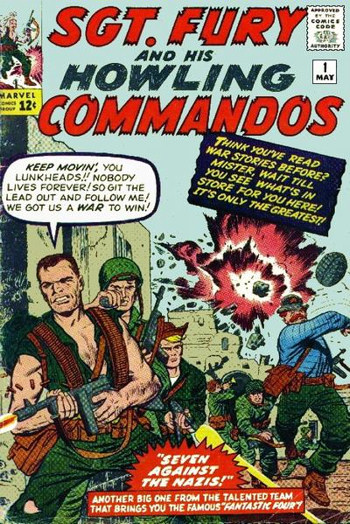 From legendary Comic Book duo Stan Lee and Jack Kirby, one of the most iconic American war comics. Sgt. Fury and his Howling Commandos followed a racially-integrated special operations squad of the US Army during World War II, as they fought Those Wacky Nazis.

A war comic "in the Mighty Marvel Manner", the Howlers' missions were usually larger-than-life adventure stories, less realistic than, for instance, DC's Sgt. Rock feature. The series run for 120 issues (May, 1963-July, 1974)

The Howlers eventually met up with many "modern" Marvel characters who were active in WWII, including Captain America, a young Reed Richards and Baron von Strucker, who was one of Fury's chief enemies both as a Wehrmacht officer and decades later as head of HYDRA. Nick Fury and many of the Howlers survived the war and became active in "modern" Marvel stories as well. Indeed, Dum-Dum Dugan even wound up leading S.H.I.E.L.D.'s anti-Godzilla forces!

In the movie, Captain America: The First Avenger, these characters (minus Nick Fury) are merged in concept with Cap's World War II superhero group, The Invaders (Marvel). Essentially it's the Howlers but includes Captain America, Bucky and James Montgomery Falsworth (who is the British superhero, Union Jack, in the comics and father of two Invaders, Spitfire and Union Jack II).

The "Howling Commandos" name has also been occasionally used by Marvel for an entirely different team, a strike force of supernatural creatures working for S.H.I.E.L.D. This version originally ran for six months back in 2006, and was revived for 2015's All-New, All-Different Marvel relaunch. It also appeared in two animated series, Ultimate Spider-Man and Hulk and the Agents of S.M.A.S.H..