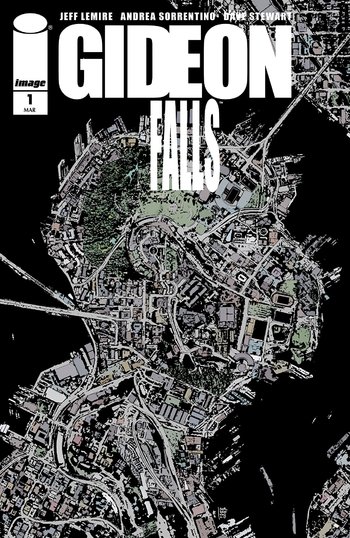 Norton Sinclair is an anxious, reclusive young man who has a delusional obsession with trash. He regularly visits a therapist about his habit of collecting nails and small pieces of wood in the city's refuse, and about his drawing of an ominous "Black Barn" that only he can see.

Father Fred is a troubled priest who has been assigned to a parish in the remote, rustic town of Gideon Falls, after the previous priest mysteriously disappeared. After he receives a vision of the priest, whose dead body is found soon after, Fred starts to investigate the mysteries of the town.

Warning: Due to the disconnected narrative structure, it gets very hard to talk about the series past the first volume without spoiling major plot points. Spoilers for the first four volumes (through issue 16) may be unmarked. Proceed with caution.