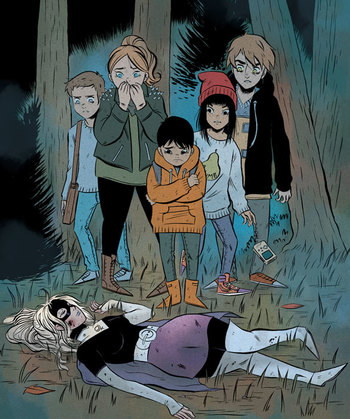 Plutona is a five-issue miniseries from Image Comics drawn by Emi Lenox and written by Jeff Lemire based on a story conceived by Lenox.

It follows five school-aged children – Mie, Teddy, Diane, Mike, and Ray – who stumble upon the dead body of the world's greatest superhero, Plutona, in the woods. Agreeing to keep the discovery a secret, the five kids unwittingly embark on a tragic Coming-of-Age Story as their mutual trust and friendship comes into doubt.

Plutona has the following tropes: