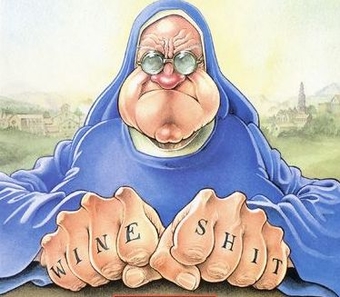 Vows? I'll show you some vows!
"Have you come to give confession? I will gladly accept your tithe...in BLOOD."
— Double, Skullgirls
Advertisement:

One would hope that most members of a Noble Profession, though human and prone to imperfection, are decent folk who make an honest effort to uphold the basic moral and ethical standards one might associate with the position.

And then there's this character.

She's a nun, at least that's what it says on her job resume. However, she acts nothing like what she's claiming to be. Instead, she can be violent, destructive, steal from the collection plate, wear revealing clothing, be perverted like the best of them, forget all about her chastity vows, take God's name in vain and swear so much she'd make a sailor cry, not to mention that she seems to have ideas or notions that directly contradict the Church she belongs to. In other words, she's anything but the normal image of a member of the Church you'd expect. It leads one to wonder how she managed to land this job in the first place. Like the Bunny-Ears Lawyer, it is possible that she's actually good at parts of her job... once you bypass all the rest of the stuff she does.

One of three things usually occur.

Additionally, on rare occasions, this character type will become Team Mom to a Badass Crew, Good-Enough Shepherd to a group of Darker and Edgier variety of heros a more traditional Apron Matron would run screaming from.

The character's reasons for being the way they are may vary:

When punished for their vagrancies or faced with a Moral Event Horizon that pushes them beyond even their own limits of acceptable behavior, this character can variously Jump Off The Slippery Slope and become The Unfettered answering to no one but themselves, turn against their order, or even suddenly realize how far they have fallen and seek redemption and reform

Much less Truth in Television than it used to be. Convents in the Middle Ages were used as dumping grounds for unruly noblewomen, who made equally unruly nuns and possibly the Trope Maker for Naughty Nuns.

This trope can apply to any member of a religious order- any character whose nominal role is that of a holy person, moral leader, etc. can be Nun Too Holy, though as the name suggests, this is most commonly used to describe a female character. For specifically male characters of this sort, see Dirty Old Monk. Sometimes overlaps with Nuns Are Funny, Nuns Are Mikos, Nuns Are Spooky, Naughty Nuns, Sexy Priest, or The Vicar. If the character is sincere but mistreats those they are supposed to cater to, they may be a Jerkass Woobie.

For characters who take their role as a moral leader too seriously rather than not seriously enough, see Knight Templar or Well-Intentioned Extremist. Compare also the Sinister Minister and Churchgoing Villain. Don't confuse with Bad Habits, which is about villains dressing like nuns or priests even though they're not.

Take into consideration the actual setting when adding examples — if everyone is dressed like Naughty Nuns in the Church, then simply wearing a sexy nun outfit isn't enough to be Nun Too Holy, nor is innocent mock-flirtation with no intent to act upon the attraction. This trope is about a character that flagrantly and unapologetically violates doctrine, appropriate behavior for their position, common courtesy, or all of the above, on a regular basis.