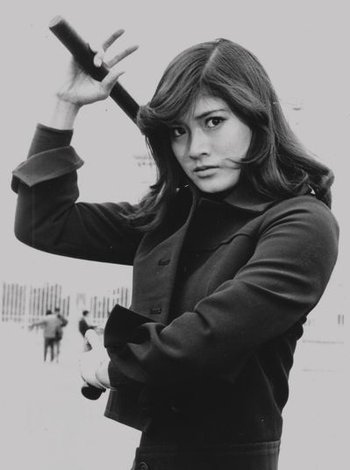 She got her start apprenticing with Shinichi Chiba, leader of the Japan Action Club (JAC), and appearing in bit parts in such projects as Bodyguard Kiba and The Streetfighter before getting her big break in Sister Streetfighter in the role of Tina Long, a part-time flower peddler (as revealed in one of the sequels) whose interest in the martial arts leads the Hong Kong police department to enlist her to find her missing brother and finish the drug bust he started. Among her other well-known films of the time are The Great Chase, in which she portrays a stock car driver who wages her own one-woman war on drugs (and the gangsters that peddle them); Golgo 13: Kowloon Assignment, in which she portrays a detective who infiltrates a drug ring; The Power of Aikido, in which she has a starring role alongside Chiba's lesser-known brother Jiro (who is himself semi-retired as an actor); 13 Steps of Maki, in which she portrays the leader of a girl gang engaged in a series of turf wars; and Sonny Chiba's Dragon Princess, in which she portrays a young martial artist raised to avenge the maiming of her father.

Towards the end of her career, she diversified with her roles. Her final film as an actress was Tora-san's Bluebird Fantasy. The next year, she married her co-star and retired from the business, staying out of the spotlight for over two decades thereafter. She has since reemerged with a couple of new books on flower arrangement. She and her husband, Tsuyoshi Nagabuchi, have a daughter named Ayane, who is also an actress.