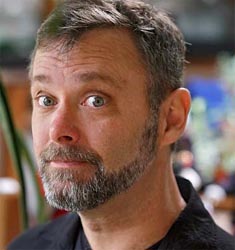 "I think my best books are those where I’m trying to do something that I’m not sure can be done."
Advertisement: