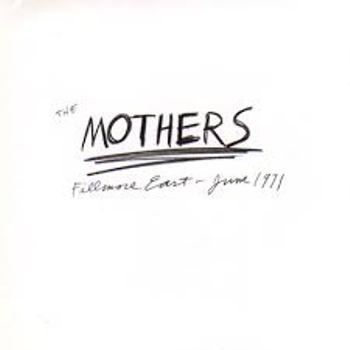 Not in the charts with a bullet (drum beat)!
Advertisement:

Fillmore East, June 1971 is a 1971 album by Frank Zappa. It was his first official completely Live Album. Just like on Chunga's Revenge (1970) Mark and Howie (a.k.a Flo & Eddie) from The Turtles appear as his lead singers. They would return on two albums more: 200 Motels (1971) and Just Another Band from L.A. (1973). As was common with most of the music made with their collaboration all tracks are a Satire on rock musicians and their interactions with groupies. Fillmore East, June 1971 is mostly comedy sketches set to music and some tracks from his previous albums performed live and in a diferent arrangement. It's generally regarded as one of Zappa's more minor works, but it has its loyal fans.

The CD version removed a track, Willie The Pimp, Part Two, which was finally re-added on the 2012 reissue of the album. Also, in the CD edition, the last minute of "Latex Solar Beef" was placed at the beginning of "Willie The Pimp Part One", making it longer. It is unclear if this was intentional or not.