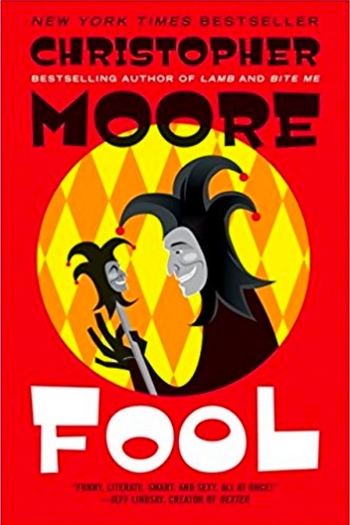 Fool is a novel by Christopher Moore, published in 2009. The story is essentially a retelling of King Lear from the perspective of Pocket, the fool of Lear's court.

Pocket has been in the employ of Lear since he was a boy, when he proved to be the only one who could make Cordelia, (Lear's youngest daughter, who was Dumb Struck at the time) laugh. When Lear prepares to marry Cordelia off, Pocket is horrified by the thought of never seeing her again and comes up with A Simple Plan to cause the engagement to fall through.

Naturally everything goes wrong, and Lear splits his realm between his daughters Regan and Goneril while disowning Cordelia. A frantic Pocket schemes furiously behind the scenes and tries to stay one step ahead of the many nobles that want to kill him as events unfold, but there are other issues, including a ghost hinting at the dark nature of Pocket's past, that will need to be dealt with as well.

For more, including plenty of spoilers, see here

. Compare A Thousand Acres, another Perspective Flip adaptation of Lear that also has a Setting Update to 1979 Iowa.