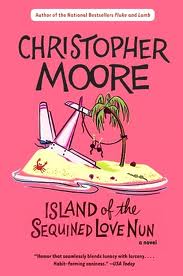 Tucker Case crashes a plane he's piloting while having sex and gets blacklisted from flying in the United States. To get around this he flies a cargo plane between Japan and an island in Micronesia instead. He encounters a missionary/doctor and his wife who are exploiting the island's natives by manipulating their worship.

A novel by Christopher Moore written in 1997.