Literature / Island of the Aunts 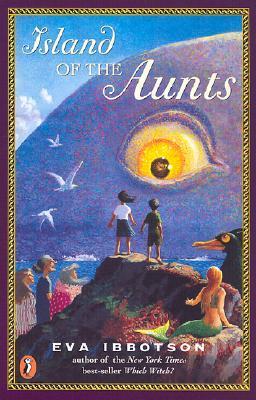 Island of the Aunts is a 1999 children's book by Eva Ibbotson, also published under the name Monster Mission.
Advertisement:

Three sisters (the eponymous aunts) take care of injured and sick creatures on a tiny island somewhere. They are not becoming any younger, and when, one day, they’re watching a TV show about extinct animals, they suddenly realize that they might go extinct themselves. They need young people to help them and inherit their duties. Therefore, they decide to kidnap kids whom nobody will miss, as the island is top-secret, and just hiring people won’t do. (Their niece and nephew are spoiled children, who really wouldn’t be able to do hard work; the offspring of a sister who found the island unhygienic and fled as soon as she was an adult.) Etta kidnaps Minette, whose divorced parents are constantly fighting and have her travel from one to the other via train on a regular basis. Coral chooses Fabio, who is originally from Brazil, and is just about to be sent to a horrible English school, where it is implied he will be bullied for looking foreign. Myrtle soon decides that the boy she volunteered to babysit, Lambert, is a horrible child, but when he accidentally sniffs her chloroform, she sees no other solution than to take him to the island and let her sisters sort it out.On the island, Minette and Fabio, after proving themselves by hard work caring for the local fauna, are told about the island’s secret: There are magical creatures, too, a family of mermaids, and a boobrie, a giant bird, and others. The aunts try to keep Lambert ignorant, but he manages to phone his father, and that’s when things become really difficult for the aunts.

Island of the Aunts contains examples of: