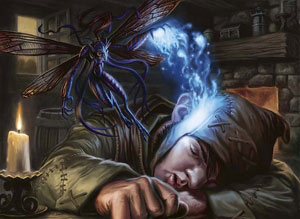 Cobb: We create the world of the dream, we bring the subject into that dream, and they fill it with their secrets.
Ariadne: Then we break in and steal it?
— Inception
Advertisement:

The opposite of a Dream Weaver, this is a character that steals/destroys/eats the dreams of others, usually because they gain something from doing so. Perhaps they themselves are normally unable to dream and want to experience it, perhaps dreams are the food source of their species, or perhaps they're just doing it for fun.

The effects of having one's dreams stolen vary greatly. Victims of dream theft may become unable to sleep properly, lose their creativity or even go completely insane. In some cases, there may not be any side effects at all, particularly if the dream is merely being shared or copied rather than completely removed.

Dream Stealers are usually villains, although heroic and neutral examples do occur. If they are harmful, this is a job for a heroic Dream Walker to stop them. If they normally reside in Dream Land, they may experience being Weaker in the Real World if they're pulled out of it or forced to exit it.

Can lead to Cannot Dream. Not to be confused with Nightmare Weaver. Compare Anatomy of the Soul and Imagination Destroyer. Contrast Dream Weaver.