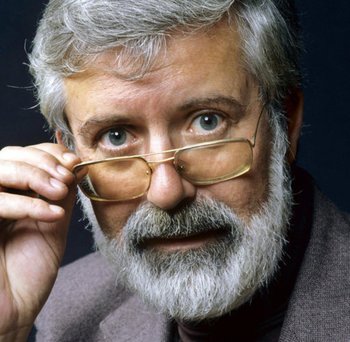 His other novels include Jim Button and Luke the Engine Driver and its sequel, Jim Button and the Wild 13, Momo, which offers a whimsical answer to the question "Why is it, when I have all these time-saving devices, I still never have any free time?", and The Night of Wishes, a wordplayful comic novel.

He Also Did some other stuff, like translating Lewis Carroll's The Hunting of the Snark in German.

When he was alive, many left-leaning critics criticized him for writing escapist and unpolitical novels, which was completely missing the point and utterly inaccurate. Jim Button, for example, contains many, many hidden metaphors for fascism in general and the Third Reich in particular. note  There was even a volley Take That! by German indie band Tocotronic, calling one of their songs "Michael Ende, Du Hast Mein Leben Zerstört" - "Michael Ende, You Ruined My Life" This also had a curious effect in that the other side of the spectrum would accuse him of being too political!

Works by Michael Ende with their own trope pages include: