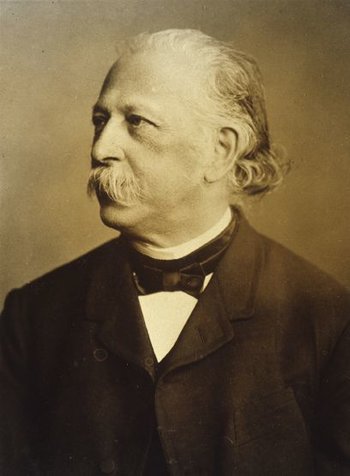 Heinrich Theodor Fontane (30 December 1819 – 20 September 1898) is generally considered the greatest German novelist of the 19th century, mostly for Effi Briest and Der Stechlin. The scion of a Huguenot family in Neuruppin in Brandenburg, he was first trained to be follow in his father's footsteps as an apothecary. After participating in the failed Revolution of 1848 he decided to become a professional writer, working for a time as a government-sponsored journalist in Britain. Returning to Prussia after the death of Frederick William IV, he first came to greater public attention as a travel writer and war correspondent, writing the Wanderungen durch die Mark Brandenburg (five volumes, describing towns, castles and places in the province of Brandenburg) and non-fiction books about the wars of 1864, 1866 and 1870/71. From 1851 to 1870 he was under contract to the ultra-conservative Neue Preußische Zeitung, which numbered Otto von Bismarck among its founders. He then became a theatre critic for the Vossische Zeitung.
Advertisement:

In 1878 Theodor Fontane published his first novel, Before the Storm, set in the winter of 1812/13 during The Napoleonic Wars. Others followed, some set in the past, but most in the analytically observed present, which to this day makes Fontane one of the "go-to authors" for readers wanting to learn about German and Prussian society in the second half of the 19th century. Fontane also wrote poetry, especially ballads, many of which are among the most frequently quoted in German literature.

Works by Theodor Fontane with their own pages include:

Other works by Theodor Fontane include examples of: