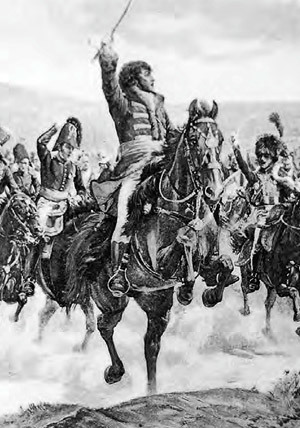 "You're wrong there. They aren't forgotten because they haven't died. They're living right out there, Collingwood and the rest. And they'll keep on living as long as the regiment lives. The pay is $13 a month and their diet is beans and hay. It may be horsemeat before this campaign is over. They fight over cards or rotgut whiskey but share the last drop in their canteens. Their faces may change, the names. But they're there. They're the regiment, the regular army—now and fifty years from now."
— Kirby Yorke paying tribute to his comrades, Fort Apache
Advertisement:

The Cavalry Officer is the leader of a group of mounted soldiers. Although by no means restricted to the genre, he appears especially as a stock character in Western fiction. Given the ridiculously huge nature of the American west, cavalry forces were the workhorses of military forces trying to control the frontier. The Cavalry Officer is typically a professional soldier but may also be represented by anyone in control of mounted civilian or paramilitary forces (such as Texas Rangers, for example).

However, as cavalry forces have operated in one form or another all over the world throughout history, the trope of the Cavalry Officer extends beyond the use in the Western. The role of the Cavalry Officer implies a certain amount of macho swagger and hubris. They are authoritative and demanding, and contemptuous of people of lesser social station. Even if the officer is in command of an infantry unit, if he is riding a horse while his men are hoofing it, he still counts as a Cavalry Officer. On the positive side, a Cool Horse is a Loyal Animal Companion giving the rider plenty of Pet the Dog moments, and a cavalry charge looks so cool even if often it is Hollywood Tactics . And a Cavalry Officer will have more varied adventures roaming about in no mans land then an infantryman standing in formation. If the Cavalry Officer is a good guy, the negative traits may be played down or diminish over the course of the story. Depending on the setting, the Cavalry Officer is usually of noble birth, or at least very wealthy, and is characteristically arrogant and aristocratic. Expect to see them carrying a Suave Sabre in order to demonstrate finesse or class as they fight.

This is partly because it usually was more expensive to serve in the cavalry than in other arms of service because they wore more glamorous dress and had to pay for their own horses — and as a cavalryman you generally could expect to lose at least one or two horses in the course of a campaign. Add to this a tendency of cavalry officers to look upon themselves as a continuation of of the knights of old in more modern times, and you see why in many films set in historic wars a Cavalry Officer tends to be more strict in the appliance of military rituals and codes of honour — when you have a duel scene, there is often a cavalry officer involved — and also more likely to indulge in a spendthrift "aristocratic" lifestyle including gambling, womanizing, racing and various eccentricities to a larger extent than officers of other services. In this context it is worth recalling that both the positive "chivalrous" and the negative "cavalier" are derived from a French root meaning "horseman".

Being a cavalry officer also required very specialized skills and a readiness to take (calculated) risks. To be successful, cavalry usually had to charge, and thus the stereotype of cavalry officers favouring Attack! Attack! Attack! and Zerg Rush tactics, also when put in command of infantry, emerged. Conversely, cavalry standing in one place within the range of enemy artillery or infantry fire often meant having to take losses without being able to inflict some on the enemy, so a sensible officer would take his men out of range, which could lead others to charge the cavalry with not having the stomach for a real fight and waging a war of their own divorced from the real one. Thus in the first half of the The American Civil War, a popular dig among the soldiers of the Army of the Potomac was the question: "Who ever saw a dead cavalryman?" To be fair there were plenty of dead cavalrymen, but unfortunately their most important work took place in skirmishes and recon missions far from the main army where no infantry could see their "deadness".

If the Cavalry Officer is one of the good guys, you can expect him to be leading The Cavalry as they come riding in to save the day! In this case, he is often a Supporting Leader. Cavalry Officers have a notoriously poor grasp of time, because they will always manage to arrive at the last possible moment.

If the Cavalry Officer is a bad guy, he will inevitably slaughter some innocents and spark a Roaring Rampage of Revenge. This will often lead to the hero seeking Disproportionate Retribution because It's Personal. If the villainous Cavalry Officer targets a group of Native Americans, it is guaranteed to lead to Genocide Backfire.

In some ways the Cavalry Officer survived the death of cavalry as an important force on the battlefield, and that his heritage continued in the age of industrialized warfare. For instance, once World War I became dominated by trench warfare, quite a number of cavalry officers joined the nascent air service to become fighter pilots, the most famous one being former uhlan officer Manfred Freiherr von Richthofen, the Red Baron. This probably helped contribute to air combat acquiring its "chivalric" image. Later on, many British cavalry regiments were re-equipped with tanks instead of horses, but cavalry traditions and modes of thinking persisted. British military historian Corelli Barnett theorised that these led to a tendency to neglect co-operation between armour, mechanised infantry, and artillery. Other cavalry units were equipped with armoured cars or helicopters.