Film / They Died with Their Boots On 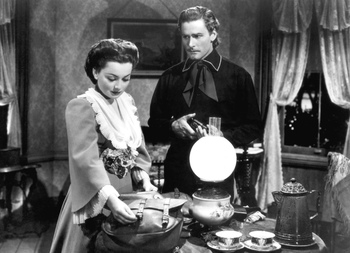 They Died with Their Boots On is a 1941 film directed by Raoul Walsh, starring Errol Flynn and Olivia de Havilland.

It is a Biopic of George Armstrong Custer, following him from 1857 to 1876. Custer (Flynn) starts out as a flamboyant, gregarious West Point plebe, who spends most of his time racking up demerits and trying to avoid expulsion. While there he meets and falls in love with Elizabeth Bacon (de Havilland), daughter of the richest man in their mutual hometown of Monroe, Michigan. Custer graduates West Point early due to The American Civil War creating a need for officers. He compiles a spectacular record that includes a key cavalry charge at the battle of Gettysburg, rising to the rank of brigadier general.

The war ends and Custer marries Libby. He finds himself at loose ends until Libby engineers an invitation from the Army for George to rejoin active service. The Custers are sent out to Fort Abraham Lincoln in the Dakota Territory, where George takes command of the 7th Cavalry. The 7th divides its time between protecting white pioneers from the Sioux, and protecting the Sioux from white men encroaching into the Sioux homeland of the Black Hills—but unscrupulous businessmen are determined to bring war to Dakota.

Last of eight films pairing Flynn and de Havilland; one of the last films de Havilland made for Warners, as she would soon after file suit to be liberated from her contract. The final scene of Custer and de Havilland parting can be seen in retrospect as a bit of Leaning on the Fourth Wall. A young Anthony Quinn appears in the latter portion of the film as Sioux chieftain Crazy Horse. Max Steiner wrote the score.

Egregiously inaccurate as history; see below.