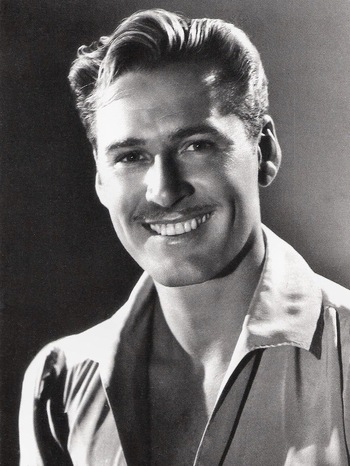 "The public has always expected me to be a playboy, and a decent chap never lets his public down."
Advertisement:

Born in ‎Battery Point, Tasmania‎, his very first film role was a bit part as Fletcher Christian in an Australian documentary, In the Wake of the Bounty, in 1933; the next year he played his first Hollywood part, the nearly-silent role of a murder victim seen alive only in flashback in the Perry Mason mystery, The Case of the Curious Bride.

When English actor Robert Donat bowed out of Captain Blood for reasons of illness, the newcomer Flynn was cast in the part of the adventurous Peter Blood. Flynn was catapulted to instant superstardom with practically no prior roles in movies whatsoever. This was in stark contrast to the practice of the time when nearly every other actor had to play bit parts and supporting roles for years before he became a star.

He was popular not only in swashbucklers but, oddly enough, in Westerns like Santa Fe Trail, (wherein he played a British-accented J.E.B. Stuart) San Antonio, Silver River, and They Died With Their Boots On (in which he played a British-accented George Armstrong Custer) as well, besides war films such as Dive Bomber, Desperate Journey, and Objective: Burma! — Flynn even did a dancing and singing stint in the Warners' all-star morale-booster, Thank Your Lucky Stars

. For a few years, there was no bigger star in Hollywood.

Flynn himself had a bit of a "live fast, die young" attitude that befit stars back then as it does today, and eventually led to him getting fewer and fewer roles as he became less and less reliable and handsome and more and more a drunkard. He was also famous (as well as infamous) for his almost supernatural ability to seduce women, which he did with a reckless disregard to the law, as evidenced by his statutory rape trial in 1942, which led to the coinage of the expression "In like Flynn" when he beat the rap. Among his other passions were boating, fighting, and drinking.

When told that he could not bring alcohol to the movie set any longer, he started to eat lots and lots of oranges... that he had previously injected with vodka. He died at the age of fifty, after he had finally gotten a few roles such as in Ernest Hemingway's The Sun Also Rises and Too Much, Too Soon (where Flynn played his friend John Barrymore) that showed that he could indeed act in serious roles as opposed to merely swashbuckling. His autopsy paid testament to the hard living Flynn did, he suffered from recurrent malaria, chronic back pain, tuberculosis, liver failure (due to his heavy drinking and drug use), a lung tumor (due to his heavy smoking), multiple heart attacks, and multiple venereal diseases.

He was often paired with Olivia de Havilland, costarring with her in eight films. De Havilland claimed to have an unrequited crush on him, though interviews are inconsistent on whether he never noticed or reciprocated once only to be turned down because he was still married. Flynn himself admitted to falling in love with her in his autobiography.

Among films set in classic periods of adventure, such as those of the Caribbean pirates of the 17th century or Robin Hood, with high romantic flavor and swashbuckling action played straight, Errol Flynn's films, such as Captain Blood, The Adventures of Robin Hood, and The Sea Hawk, set the gold standard.

Also the Trope Namer for Flynning.

Films in Which Errol Flynn Appeared Include: