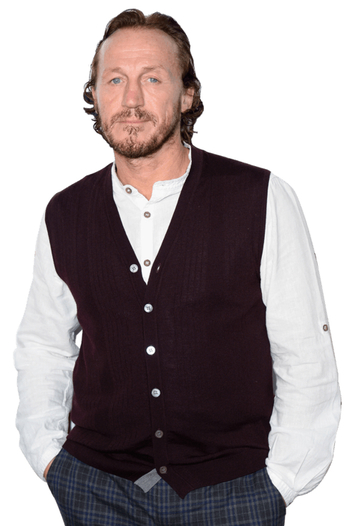 "When you're in something like Game of Thrones and get the chance to play a part like Bronn, with that cast and with Peter Dinklage, it's wonderful."
Advertisement:

Jerome Flynn (born 16 March 1963 in Bromley, England) is an English actor and singer.

He first came to notice in the early 1990s British Army based series Soldier Soldier. Flynn and Robson Green played the two most popular characters in the early years of the series Paddy (Flynn) and Dave (Green) and after singing a surprisingly popular duet in one episode formed a singing duo called Robson & Jerome and had a fair amount of success in the UK in the mid to late 90s.

After leaving Soldier Soldier and the breakup of the duo, Flynn kept a low profile for many years before gaining a massive career resurgence and a much higher international profile after being cast in the role of Bronn in the hit adaptation of A Song of Ice and Fire, HBO's Game of Thrones, where his partnership with Peter Dinklage's Tyrion Lannister has been highly praised. Another prominent role of his is that of Detective Inspector Bennet Drake in Ripper Street.