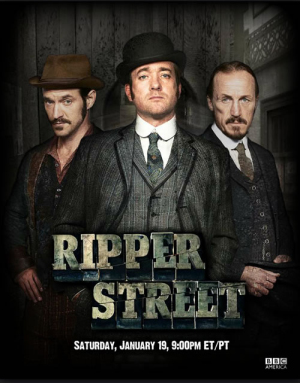 Jack's crimes will not be forgotten.
Advertisement:

In April 1889 (six months since the last Jack the Ripper killing), H Division is responsible for policing one and a quarter square miles of East London, a district with a population of 67,000 poor and dispossessed. The men of H Division had hunted Jack the Ripper and failed to find him. When more women are murdered on the streets of Whitechapel, the police begin to wonder if the killer has returned.

They cross paths with Tenter Street brothel madam Long Susan (MyAnna Buring), who came to London with Jackson from America and lets him reside at the brothel. Their relationship becomes strained due to Jackson's close involvement with H Division and Reid.

Sensationalist newspaperman Fred Best (David Dawson) knows a dark secret about Reid's daughter's death. Although still being troubled by her daughter's death, Emily Reid (Amanda Hale) determines to make a new life by helping the fallen women of Whitechapel despite her husband's reservations.Each episode features stand-alone crimes that test Reid, Drake and Jackson, both in their working and private lives.

Axed in 2013 after two short seasons but Un-Canceled in 2014 after Amazon stepped in to co-fund it.

Has a character page under construction. It needs love.