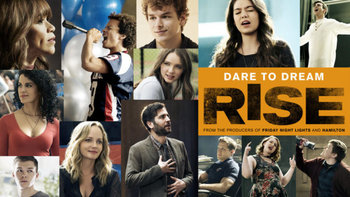 Glee, in the font of RENT
Advertisement:

Rise is a 2018 TV show from NBC, based on the novel Drama High (itself Very Loosely Based on a True Story), starring Josh Radnor as an exceptionally average high-school English teacher with Dead Poets Society-style aspirations. He takes over the Drama Club in the pilot episode and decides, despite the school being in a small conservative town, to put on Spring Awakening.

The series was ultimately canceled after a single season.