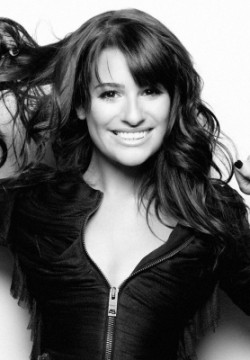 "I love Broadway World! I'm like such a dork; I wake up, get my cup of coffee, and am like, 'Let's see what's going on on Broadway World!'"
Advertisement:

Lea Michele Sarfati (born August 29, 1986) is an American actor, singer, and author. She was born in the Bronx. She started acting at the tender age of eight as Young Cosette in a production of Les Misérables, which she admits she tried out for on a whim. She then continued on to play the Little Girl in the original Broadway cast of Ragtime, Shprintze on Fiddler on the Roof, and several parts in various musicals, concerts, and plays, reaping in a bunch of awards and accolades while she was at it. She also played Wendla in the musical and the original Broadway run of Spring Awakening.

Then she auditioned for the part of the obnoxious, talented diva Rachel Berry on Glee (with a rendition of "On My Own" from Les Miserables. Interviews say, though, that it was in fact good friend and ''Spring Awakening'' co-star Jonathan Groff who introduced her to series creator Ryan Murphy, and that the part of Rachel was written with her in mind.) And to say that playing Rachel made her famous is a huge understatement.

She made her film debut in New Year's Eve and has lent her voice to the titular character in Legends of Oz: Dorothy's Return.

Michele is a vegan and a very strong advocate for gay rights, as well as for PETA and has campaigned very openly against animal cruelty.

In early 2014, she released her debut musical album, Louder.

In 2020, Lea was accused by actor Samantha Ware

of "constant micro aggressions" as well as having made the set of Glee a "living hell" for her and others. Soon afterwards several people - including Heather Morris

- stepped up to add their own stories of Lea's alleged bad behaviour, prompting Lea to issue an apology "for any harm caused"

, and she was dropped as a spokesperson for "HelloFresh" as a result

previously about their conflicts on set), and also set her Instagram to semi-private.

Michele - as well as Chord Overstreet and Dianna Agron - would not be taking part in the GLAAD cast reunion/tribute performance to Rivera.

Michele is married to businessman Zandy Reich and they have one child, a son named Ever Leo, who was born in August 2020.

Tropes commonly used in her roles