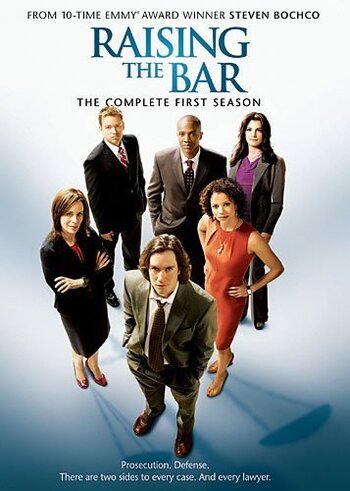 Raising The Bar is a Courtroom Drama from Steven Bochco, which started its first season on TNT in summer 2008. It follows a group of friends from law school who, despite taking different paths (two of them are prosecutors, two are public defenders and one is the secretary of a judge) have kept in touch and, at least outside the courtroom, maintain a relatively friendly relationship.

The first season took a while to find its identity but wound up being largely about the antagonistic relationship between main character Jerry Kellerman (Mark-Paul Gosselaar) and Judge Trudy Kessler (Jane Kaczmarek). The second season gave the other characters more screen time and development, and moved away from the "This City Only Has One Judge" theme by adding two more characters in robes. With the first utterance of the word "bullshit" in the last episode, it also looked much more like a Bochco series than it did in the first season, which managed, despite being on cable, to be tame compared to NYPD Blue.