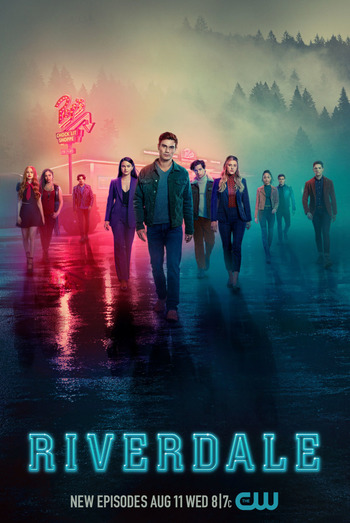 "What makes a place feel like home? Is it warmth and familiarity? Some idealised, make-believe TV version of the American Dream? Is it love and acceptance? Or is it simple safety?" note From left to right: Cheryl Blossom, Toni Topaz, Fangs Fogarty, Veronica Lodge, Archie Andrews, Jughead Jones, Betty Cooper, Tabitha Tate, Reggie Mantle and Kevin Keller.
"Our story is about a town. A small town. And the people who live in the town. From a distance, it presents itself like so many other small towns all over the world. Safe. Decent. Innocent. Get closer, though, and you start seeing the shadows underneath..."
— Jughead Jones
Advertisement:

Riverdale is a television series aired on The CW and based upon the Archie Comics franchise. Set in modern times, the show is a subversive take on the franchise's characters. It premiered on January 26, 2017 and is currently in its sixth season, with a final seventh season confirmed in March 2022 for release in 2023.

Archie Andrews (KJ Apa), Jughead Jones (Cole Sprouse), Betty Cooper (Lili Reinhart), Veronica Lodge (Camila Mendes), and their friends and families live in the titular small town, which has more darkness and weirdness than suggested by the town's wholesome façade. Over the summer, Jason Blossom dies and leaves his sister Cheryl (Madelaine Petsch) grieving. Though initially believed an accident, it's soon discovered that Jason was murdered, and the ensuing investigation causes a trove of small-town secrets to start creeping to the surface.

The series' executive producers include Roberto Aguirre-Sacasa (Afterlife with Archie) and Greg Berlanti (Arrowverse). The show is also available on Netflix outside the USA and Latin America the day after airing on television.note Despite being shown on the service with "A Netflix Original Series" appearing in the opening titles in the series' credit typeface, it is not produced for the service

It also got comic-book tie-ins, including:

Agent Pierce of the FBI learns that Operation Turkey Shoot is ordered to be permanently cancelled. Also, he got fired from his position as a Special Agent.

Agent Pierce of the FBI learns that Operation Turkey Shoot is ordered to be permanently cancelled. Also, he got fired from his position as a Special Agent.