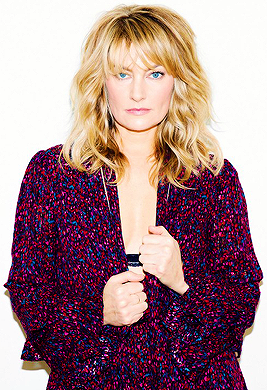 The kind of girl that makes you wish you spoke a little French
Advertisement:

Amick is best known for her role as Shelly Johnson in David Lynch's cult classic television series Twin Peaks, a role she would reprise in its 1992 film continuation Twin Peaks: Fire Walk with Me, and then Showtime 2017's revival Twin Peaks: The Return.

After Twin Peaks, Amick would continue to act primarily on television, either starring or guest appearing in a multitude of shows that include Central Park West, Fantasy Island, Gilmore Girls, My Own Worst Enemy, and Witches of East End.

In 2016, Amick was cast in Riverdale, The CW's reimagining of the Archie Comics franchise, where she portrays Alice Cooper, mother of lead character Betty.

She provides tropes of: