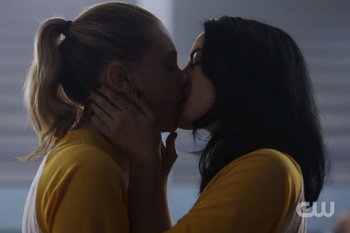 And this is just the first episode
Riverdale is as full of Ho Yay as it is maple syrup.

Josie seems to have subtext with all the girls she has any kindness toward.

Cheryl is no different than Josie and Veronica in this regard, except that she can do subtext even while being mean.

Archie and other boys

Jughead and other boys