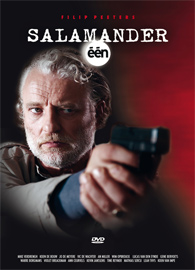 There's something rotten in the state of Belgium
"Everyone has secrets. But these secrets can bring down a nation."
—Tagline
Advertisement:

Salamander is a Belgian-set TV thriller series made in 2012 as a cross-European collaboration, primarily produced by VRT.

The first season centres on skullduggery at the Jonkhere Bank, a small private bank in Brussels. In what at first looks like a straighforward heist, 66 safe deposit boxes belonging to the most powerful people in Belgium are robbed. The owners want to keep the thefts under wraps, ostensibly to avoid bad publicity and depositors losing confidence in bank security. However, maverick cop Paul Gerardi (Filip Peeters) throws himself into the investigation, despite being warned off the case. Gerardi discovers that the victims are members of a secret organisation called Salamander, made up of the country's industrial, financial, judicial and political elite, and the safe-deposit boxes contained their most intimate secrets – secrets which go back to World War II, and could bring down the nation. Persuasion soon follows theft of the boxes, and several compromised people choose suicide as the only option. As he becomes the target of both the criminals and the authorities, Gerardi - at great personal cost - must quickly find out what their agenda is and who is behind the thefts. Sub-plots involve Gerardi's home life and disintegrating marriage, and his own single lapse into corruption - falsifying a police operation that went wrong so as to save a colleague from disgrace. The colleague, who shot a man dead needlessly, was so shaken he became a monk. He has also, unknown to Gerardi, betrayed him by having had an affair with his wife. The same ex-colleague also betrays him to Salamander.

The second season starts with a death of an asylum seeker named Léon Tchité. During Paul's investigation into his death, he finds out that his death was no coincidence and it's somehow linked to a blood diamonds network operating in Europe from Belgian soil.

Broadcast in Europe in late 2012, and on the BBC in January-March 2014, this was BBC4's first Belgian acquisition. In Flemish, with some French, this is a twisty and compelling tale. The second season aired from April 14th in 2018 on BBC4.

The show has been available via Netflix. Attempts to do a remake have been stalled for now.

Tropes which may not be all they seem and which have the power to bring down a Western democracy include: