The Game Plays You 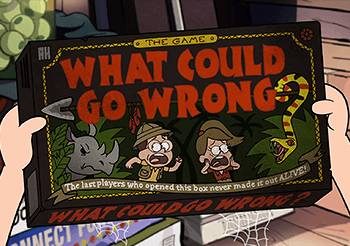 One or more characters are asked to play a game (or find a game), and are given a short description of the game. The characters agree, either because the game sounds interesting or because "everyone is playing", or just because they fear ridicule. At that point, the worst possible punishment for not playing is being called a coward.

When the game is in full swing, the players realize that there are consequences in Real Life, and that either they or their loved ones are game pieces. The stakes have been drastically raised, and the players will have to fight to get out alive and sane.

This trope is often used to deliver An Aesop about considering the consequences before rushing into something, even if it looks harmless at first, therefore instructing impressionable viewers to become suspicious of everything that looks fun, often for absolutely no reason. And in many cases, the players are indeed tweens and teens, the potential targets for the aesop.

Super-Trope of The Most Dangerous Video Game. Compare The Game Come to Life. See also Pleasure Island, and Be Careful What You Wish For for a similar aesop. Please note that this isn't related to Russian Reversal either.