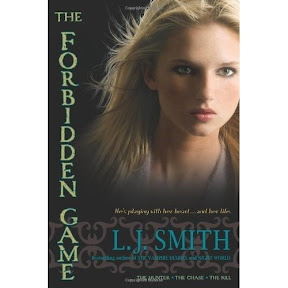 He's playing with her heart. . . and her life
A series written by L. J. Smith. The Forbidden Game tells the story of Jenny Thornton, a girl who buys a board game for her boyfriend's birthday party. She finds herself drawn to the strange boy who sold her the game. When her and her six friends start to play the game, the fun quickly turns to terror as they are sucked into the game. The first three books in the series are:
Advertisement:
Lisa has stated on her site

that she is going to write a sequel called Forbidden Game: Rematch, after she is done writing Strange Fate and Brionwy's Lullaby.

The Forbidden Game contains examples of: