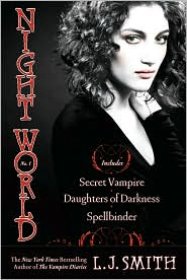 Not a woman you want to mess with.
Four to stand between the light and shadow,
Four of blue fire, power in their blood.
Born in the year of the blind Maiden's vision;
Four less one and darkness triumphs.
One from the land of kings long forgotten,
One from the hearth which still holds the spark,
One from the Day World where two eyes are watching,
One from the twilight to be one with the dark.
—Aradia, Huntress
Advertisement:

L. J. Smith's YA fantasy/supernatural/romance series Night World was first published between 1996 and 1998. It was designed as a ten-book series. After a ten-year hiatus, the tenth and final book Strange Fate is now scheduled for publication.

The series deals with the existence of a secret society of witches, vampires, and shapeshifters, and how they interact with the inhabitants of the human world. Although humans have long since gained control of the world over the Night World's minority, the supernatural members of the society treat humans with disdain and prejudice, calling them "vermin" and plotting ways to regain power over the world.

It is fine for Night World inhabitants to treat humans in whatever way they please as long as two essential rules are upheld:

What follows is a series of stand-alone yet interrelated stories that tell what happens when (wait for it...) these rules get broken. The first four or so books set the ground-work for the series as a whole, introducing characters who turn up in later books and concepts such as the Soulmate Principle and Circle Daybreak, as well as the mythos and history of the Night World. Book Six, Soulmate, introduces the onset of the apocalypse. The rest of the series deals with the measures that good and evil forces take to prepare for it.

In order, the books are: