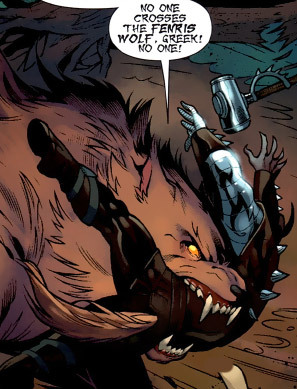 Even if werewolves are different from series to series, they tend to be easy to spot because of the one thing they typically have in common across all works: their Meaningful Names are almost always a reference to the werewolf myth.

Typically, your fictional werewolf will have his name based on...

Werewolves aren't required to have wolf-related names, but if you're in a supernatural setting and you meet a guy named Romulus Wolfgang, you can bet that he gets hairier when the full moon rises.

It can also apply to other werebeasts: werelions called Leo, werebears called Bjorn, and so on.

A Sub-Trope of A Lizard Named "Liz", Meaningful Name and Our Werewolves Are Different.