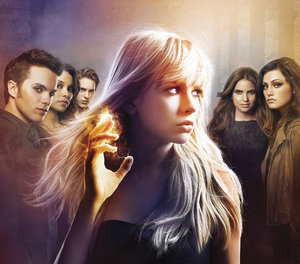 A series on the The CW based on a book trilogy by L. J. Smith, who also created The Vampire Diaries.

Cassie Blake thought she was just a normal girl, until her mother is murdered by a witch who makes it look like a gas explosion. She moves in with her grandmother, and soon comes to the attention of five of her new classmates. They're all children of witches, and explain to Cassie that her mother was a witch too. And with Cassie in town, they now have a full "circle" of six members, meaning their powers have increased dramatically. Cassie must decide for herself whether to accept what it appears destiny has in store for her. Meanwhile, her mother's killer is also a resident, and the father of one of the Circle.

Slightly longer version: Following the death of her mother, Cassie Blake (Britt Robertson) moves to Chance Harbor, Washington to live with her grandmother. Her attempts to adjust to the new town are crushed when five of her classmates, Adam Conant (Thomas Dekker), Diana Meade (Shelley Hennig), Faye Chamberlain (Phoebe Tonkin), Melissa Glaser (Jessica Parker Kennedy), and Nick Armstrong (Louis Hunter), reveal to Cassie that she comes from a long line of witches and is the final member of their coven; with her they are able to unlock the full extent of their powers. Initially Cassie refuses to believe that she is a witch, even after Adam helps her to unlock her powers. It is only after she discovers an old leather-bound book of spells left to her by her late mother, Amelia, that Cassie begins to accept her power. Inside the book is a message to Cassie explaining that she kept their real family history and her powers a secret in order to keep her safe; as the circle soon finds out, their powers attract dark and dangerous attention that constantly puts them in harm's way.

Has a Character Sheet with the main members of the Circle, the parents/families, the supporting characters and the antagonists/villains.