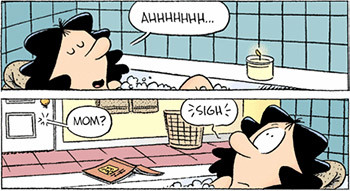 "It's always the same! Someone comes and disturbs me when I'm in my bath. Last year, and the year before that. It never fails!"
— Vitalstatistix, Asterix
Advertisement:

It seems to be really difficult for people in entertainment media to actually finish a bath or shower. The phone or doorbell rings, somebody bursts in on them, or they die.

In part, this is due to the Law of Conservation of Detail . The only reason to show somebody doing something as mundane as bathing is because something narratively important is going to happen during that bath — unless it's just for the Fanservice, or on occasion if it's a Slice of Life work.

This trope is usually played for laughs when it's not a Deadly Bath; a bath is supposed to be relaxing and being naked is embarrassing, which makes the addition of stress and/or visitors all the more annoying for the character (and therefore funnier for the audience).

This trope often coexists with the Candlelit Bath, since the extensive setup increases the comedy or drama value of ruining the whole thing.

Subtrope of the Bathtub Scene or Shower Scene. Super-Trope to the "Psycho" Shower Murder Parody.