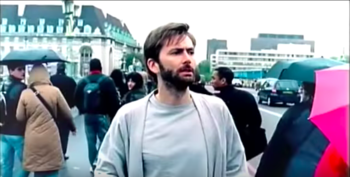 Alan walking through London in his hospital gown
Advertisement:

Recovery is a 2007 drama film starring David Tennant. He portrays Alan Hamilton, a building manager who undergoes a medical coma following a car accident. Once awoken, Alan is quickly identified as having brain damage with mild amnesia. The film depicts the struggle of his wife's acceptance of her husbands condition, and related limitations, and Alan's struggles to accept himself.