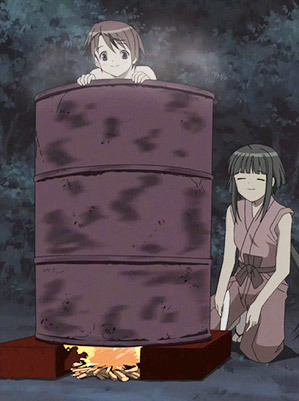 When the character has to take a bath inside a barrel or small oil drum that is usually outdoors and heated over a fire underneath. This is typically seen in poor rural environments out in the country. Despite the bath being too small to fit more than one person, Bathtub Bonding still can occur, but it's guaranteed to get cramped, making at least one of the bathers uncomfortable (though if you change it so that way one person is bathing and the other isn't, you can have a subverted version of the trope. Or you can avert it by making the drum big enough to accommodate two people). Outdoor Bath Peeping is another thing that is generally guaranteed. This is the only time a bathtub can be outside without it being considered an Awkwardly Placed Bathtub.

This setup is called a "Goemon-buro" (Goemon's Bath) in Japan, in (a somewhat morbid) reference to Ishikawa Goemon and how he was executed by being boiled alive.