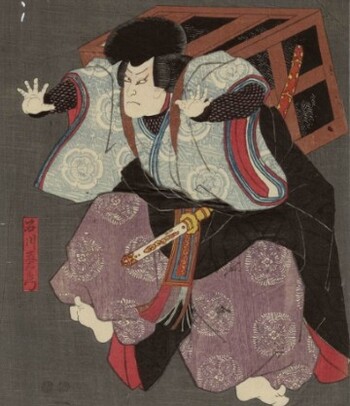 "What a great view!"

Ishikawa Goemon is a Historical Domain Character from Japan, specifically the Sengoku Jidai. This outlaw character is considered the Japanese equivalent of Robin Hood, and his story is still featured in Kabuki Theatre.

This legendary rogue is Shrouded in Myth and has become a Japanese Folk Hero. He is often given exaggerated Ninja skills. His attempt to assassinate Toyotomi Hideyoshi has given rise to speculation for his reason (some say Hideyoshi had his wife killed, others that he wanted to stop a tyrant), but was caught when he accidentally knocked off a bell. Ishikawa was boiled alive in a iron kettle along with his son. With the last of his strength, Ishikawa held his child out of the kettle

◊ (and afterward plunged him into it to kill him quickly). This story has given rise to the nickname of "Goemon bath" (goemonburo) for the large iron kettle-shaped bathtubs common in Japan, as mentioned in Drum Bathing.

Traditionally, Goemon tends to be portrayed as a Gentleman Thief and a Large Ham, sometimes as a Big Fun-character type, often with Kabuki Sounds, mannerism and huge, afro-like hair. Also uses fireworks a lot.