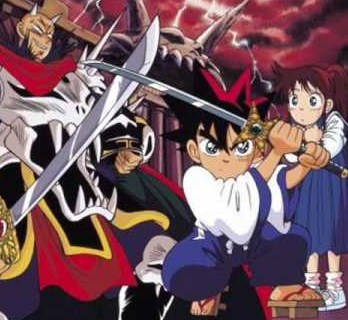 Yaiba (Ken'yu Densetsu Yaiba/Legend of the Swordsman Yaiba) is a Shonen manga written by Gosho Aoyama, known for Case Closed and Magic Kaito. It starts out as a light, funny manga very similar to Dragon Ball but slowly becomes more serious towards the endnote also similar to Dragon Ball. The manga ran in Weekly Shonen Sunday from 1988 to 1993.

The main character, Yaiba Kurogane is a Kid Samurai, trained by his father Kenjuuro in a unspecified jungle. They both return to Japan where they're "hosted" by Raizo Mine, an old rival of Kenjuuro. Here Yaiba meets Sayaka, Raizo's daughter and Onimaru, a highly skilled kendo master. To sum up, they become bitter rivals and Onimaru gets really obsessed with beating Yaiba. In order to do so, he tries to use the legendary Fujin Katana (Wind Devil Sword in some translations), which grants power over Wind Gusts and Typhoons, but the sword turns him into a evil Oni (demon) bent on conquering the World. In order to stop him, Yaiba, with the help of Sayaka and his pets Kagetora (a cowardly Tiger) and Shonosuke (a nice Vulture), goes on a quest to find and master the Raijin Katana (or Thunder God Sword), guarded by a 400 years old Miyamoto Musashi.

An anime was made, but it lasted only 52 episodes, airing from 1993 to 1994 and covering the story from the beginning to Kaguya's Arc. Yaiba and friends appear in the Massive Multiplayer Crossover game, Sunday VS Magazine: Shuuketsu! Choujou Daikessen.

Now it has a Characters Page.