Manga / The World God Only Knows 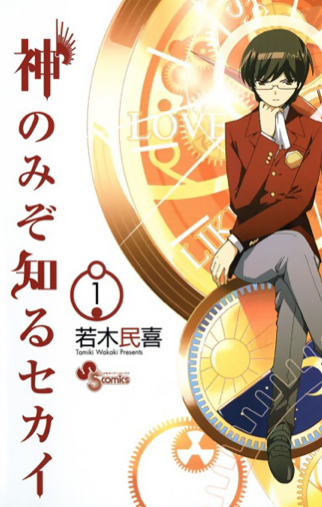 God to one world, Otaku to the other.Note Pictured above: Keima Katsuragi, as featured in the cover page of Volume 1.
"I can see the ending!"
— Keima Katsuragi
Advertisement:

Keima Katsuragi is famous on the Internet as "The God of Conquest": there is no Dating Sim that he cannot beat, no heroine whose heart he cannot conquer. However, in Real Life he's an introverted and unpopular Otaku Jerkass who hates all real girls and buries himself in video games.

One day, he receives a provocative email asking for help in conquering some hearts. He rises to the challenge, inadvertently making a Deal with the Devil to help Elsie, a lesser devil from Hell, re-capture some runaway spirits. These spirits hide in the hearts of troubled girls, and the easiest way to force them out is to have the girl fall in love. If he fails, then it's Off with His Head! Thus begins Keima's daunting task, which throws him deep into exactly what he's been dismissing: Real Life, and more importantly, real girls.

The series' main purpose is poking fun at different aspects of Dating Sims (or "Gal Games") and playing with various heroine archetypes, usually by setting up a stock personality trope and then revealing the truth to be far more complex. It also aims a megaphone at many, many things — pretty much everything.

The original manga by Tamiki Wakaki was serialized in Shonen Sunday from 2008 to 2014. The story as a whole can be summed up as three major story sagas starting with the Capture Targets saga spanning chapters 1-113, the Goddess saga for chapters 114-189, and the Heart of Jupiter saga for chapters 190-268.

The Capture Targets saga deals with Keima going about real-world Dating Sim conquests to capture runaway spirits that plague the hearts of troubled girls. The Goddess saga deals with Keima having to search for the Jupiter Sisters who have hidden themselves amongst the human populace. Finally, the Heart of Jupiter saga has Keima time-traveling into his past seven-year-old self to complete the checkpoints that established his present life. For more details regarding the shorter arcs that make up each of these sagas, visit the recap page.

An anime adaptation by Manglobe began in October 2010, with a second season released in April 2011, along with three OVAs. A Spinoff OVA

Note Localized simply as "Goddesses". The first three seasons have been licensed and dubbed by Sentai Filmworks, with the rest of the OVAs in production.

A Spinoff involving most of the named female cast and trains have been released.

All three seasons of the anime can be watched here

Let these tropes teach you something useful...

The World God Only Knows

Yeah, do NOT expect these types of people to effortlessly scream an angry "Baka!".

The World God Only Knows

Yeah, do NOT expect these types of people to effortlessly scream an angry "Baka!".