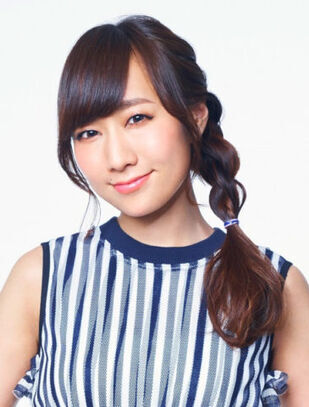 Ayahi Takagaki, born on October 25, 1985 in Tokyo, is a seiyuu as well as a singer. Some of her most notable anime roles include Chris Yukine in Symphogear, Lisbeth in Sword Art Online, and Erika Karisawa in Durarara!!.

She majored in singing in college, specializing in opera, and joined a seiyuu supergroup Sphere in 2009 (along with Haruka Tomatsu, Aki Toyosaki, and Minako Kotobuki), so we may expect some Awesome Music from her in years to come. Also, she speaks/sings Surprisingly Good English.

On August 23, 2019, she got married to a theatre staff member who worked with her in her stage performance. In October 2022, she gave birth to their first child

As she majored in opera singing in college, she also has several songs worth of a mention: