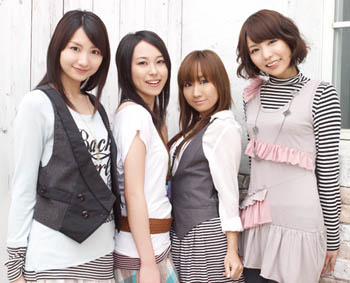 When the group was formed in early 2009, only Haruka had released solo singles (not counting Image Songs for shows), while the other three were most known for their voice acting, but since then all members have solo careers with their own singles, albums and concert tours, while still being members of the band.

In 2011 they starred in Sphere Club, their own 15-minute variety show which lasted for 22 episodes. The following year saw the launch of the Anime First vehicle Natsuiro Kiseki, in which they played the four main characters, and did a Image Song for each episode in various lineup combinations. Since they're all both singers and actors, live concerts often include a 15-20 minute play performance in addition to the songs.

They made a quick animated cameo as themselves in an episode of I Couldn't Become a Hero, So I Reluctantly Decided to Get a Job.

Associated with the following tropes: