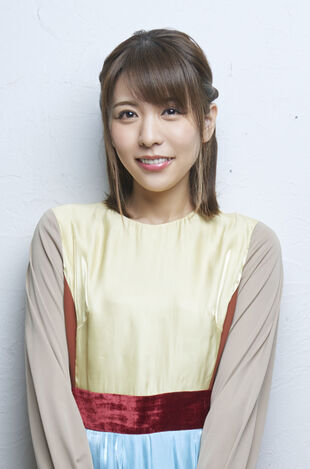 ... Oh! Right, the description! Aki Toyosaki (豊崎愛生, born October 28, 1986 in Tokushima, Japan) is a Japanese actress, voice actress and singer, best-known for her role as the ditzy guitarist Yui Hirasawa in the anime K-On!. Her actual voice seems to be rather similar to Yui's on that show, judging by interviews (however, she used to hate her high-pitched voice when younger). Toyosaki typically lends her voice to characters that are silly but kind-hearted.

She's also been expanding as a music idol: she joined the J-pop group Sphere in 2009, along with fellow seiyuu Haruka Tomatsu, Ayahi Takagaki, and Minako Kotobuki, releasing a solo single that same year. As a result of her roles, she is in relationships with Minako Kotobuki and Yōko Hikasa, both costars on K-On!, as well as Kanae Itō, who are Su and Amu/Dia, Momo and Nana, Uiharu and Saten, Otohime and Ringo, Melwin and Eris, Nako and Ohana and Jun and Elsie respectively.

Then she got married somewhere in October 2017 with someone outside the voice acting business.

You can't go just yet! Troper, I challenge you to a duel!