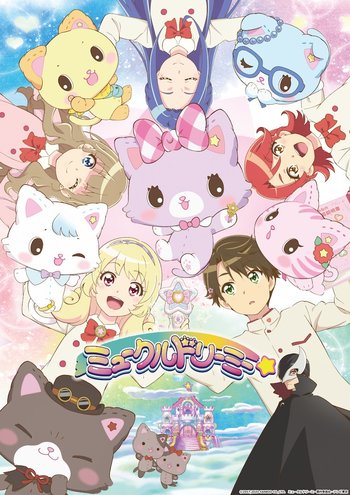 One day, in Miracle Dreamy Kingdom, the kingdom above the sky, the queen and her worker fairies were working on plushes that were designed to be "Dream Partners", but then, one of them, Mew, fell from the sky, and landed in the hands of recently new middle schooler Yume Hinata. Together, they are able to enter the dreams of others and collect dreamy stones.

Mewkledreamy is a Magical Girl anime series directed by Hiroaki Sakurai, written by Hiroko Kanasugi and animated by JC Staff, based on the character franchise of the same name created by Sanrio. it ran from April 5, 2020 to April 4, 2021 on TV Tokyo, with overall 48 episodes.

In December 4th, 2020, a second season of the show was announced, titled Mewkledreamy Mix!. unlike the first season, this one, which's aimed at the preschool demographic this time, has the Ichi-Naru episodes, which's half live action segment featuring the titular duo Note Who are a Youtuber duo

since 2015. doing various activities and half recap for the previous episodes narrated by the Dreamy Mates, that air after (usually) three episodes in a month. it ran from April 11, 2021 to March 27, 2022, with overall 50 episodes (37 animated episodesnote Or just 36, since episode 50 is just a Recap Episode for the entire season. and 13 Ichi-Naru ones).

This show provides dreams about:

It seems that if you have a dream about TV Tropes, you've been browsing too much TV Tropes.