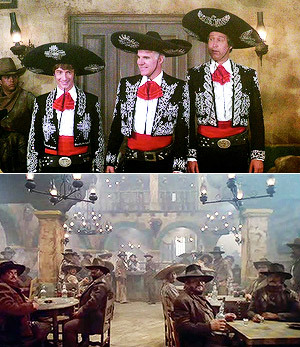 Two hundred eyes watched the pair as they pushed their way through the crowd to the bar, a hundred mouths paused in the act of drinking, cursing or pleading, and ninety-nine brows crinkled with the effort of working out whether the newcomers fell into category A, people to be frightened of or B, people to frighten.
— Wyrd Sisters
Advertisement:

A character or a group of them spot a restaurant (or bar or tavern, etc.) and enter. The customers inside are eating their meals, drinking heartily, and chatting with each other...then slowly or abruptly fall silent as they see these new customers at the entrance.

This could happen for a number of reasons. This eating establishment could be a Local Hangout of a small town or remote area and it's quickly obvious the now-silent patrons recognize the new arrivals as not being from around here or perhaps it's The Dreaded. If either the newly arrived customer is a local and the target of scandalous gossip or just considered a social outcast, this trope may also happen. It could be a Bad-Guy Bar and the rogues there are giving the newcomers dirty looks. Probably the most archetypal version of this trope occurs in Westerns, where the standard image is of either a criminal or lawman entering the saloon through swinging doors and everyone goes silent (always including a piano player), knowing that a gunfight is about to ensue.

In some cases, the crowd reacts like this the moment a character enters the room, as though the very sight of somebody walking through the front door is enough to provoke this reaction. Maybe the locals all come in through the back? If the newcomers are lovable cowards, the awkward silence may cause them to turn right around and leave. A badass character may instead take a seat at the counter or at the table (depending on the setting). If the bartender, waitstaff, or customers don't take a liking to new arrivals, they may tell them outright to leave or alternately say that they're not welcome here. This may be made funnier with someone who's pouring something (tea, coffee, etc) pours it too much because he/she's in Stunned Silence silence when this guy enters. And Heaven forbid they sit in a booth or table that is used by that certain regular.

Sometimes, the newcomer will have to say or do something specific in order to prove their familiarity with the locals. If they succeed, everyone will return to what they are doing as if nothing had happened.

Sometimes accompanied by Letting the Air out of the Band or a Record Needle Scratch.

Compare The Freelance Shame Squad, which is a similar phenomenon where everyone in the room instantly pays attention to the protagonist (this time for doing something embarrassing). Also compare Chirping Crickets.