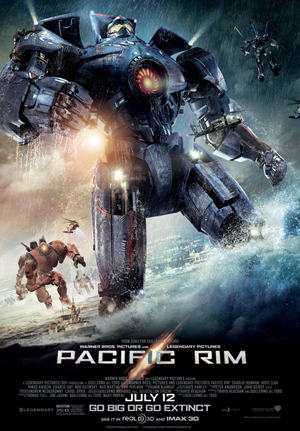 "...When you're in a Jaeger, suddenly, you can fight the hurricane. And you can win."
"Today... today. At the edge of our hope, at the end of our time — we have chosen not only to believe in ourselves, but in each other. Today, there's not a man nor woman in here that shall stand alone. Not today. Today, we face the monsters that are at our door — and bring the fight to them! Today, we are cancellin' the apocalypse!"
— Marshal Stacker Pentecost
Advertisement:

20 Minutes into the Future, giant alien monsters known as "Kaiju" arise from a dimensional rift in the Pacific Ocean and leave a trail of destruction in their wake. Humanity eventually holds its own against the gargantuan threats by creating Humongous Mecha known as Jaegers, but over the years, the Kaiju grow stronger and turn the tide of battle back to their side.

When the growing losses of the Jaegers cause the world's governments to cut the program's funding, Marshal Stacker Pentecost designs one final counterattack against the Kaiju threat: a Jaeger assault on the dimensional rift itself in the hopes that they can close the rift for good. To put his plan into motion, he recruits Raleigh Becket, a washed-up veteran Jaeger pilot who ended up traumatized by the death of his brother (who was also his co-pilot) during a Kaiju battle five years prior. Alongside Mako Mori, a talented rookie with a dangerous grudge against the Kaiju, Raleigh suits up to pilot a Jaeger once more in order to take the fight to the Kaiju before they overrun the world.

The 2018 sequel is Pacific Rim: Uprising with John Boyega and Scott Eastwood taking over as lead characters. Del Toro passed on directing responsibilities to Steven S. DeKnight (showrunner on Spartacus: Blood and Sand and Daredevil) while remaining a producer. On November 8, 2018, Netflix announced an original animated series that will expand upon the story of the first two live-action movies, titled Pacific Rim: The Black.

Characterization tropes for Humans, Jaegers and Kaijus go on the Characters Sheet.

open/close all folders
Tropes A to E
Tropes F to K
Tropes L to P
Tropes Q to S
Tropes T to Z
Where is my goddamn shoe?!
Feedback

There's no need to rush

You don't need to be flesh and blood to make use of this trope - even if you're a mecha, taking your time on the approach will ensure everyone knows you are fully capable of cracking skulls before the first blow connects.

There's no need to rush

You don't need to be flesh and blood to make use of this trope - even if you're a mecha, taking your time on the approach will ensure everyone knows you are fully capable of cracking skulls before the first blow connects.