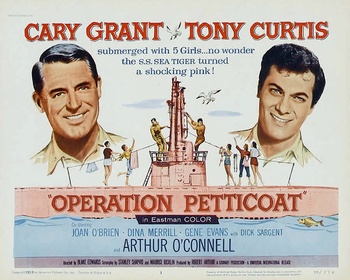 A 1959 comedy directed by Blake Edwards and starring Cary Grant and Tony Curtis, concerning the manic maiden voyage of the submarine Sea Tiger in the early days of World War II.

The movie begins with Rear Admiral Matt Sherman (Grant) making a sentimental visit to his first command, which is due to be scrapped. He goes down to the empty Captain's cabin, opens the old log book and begins to read. Cue flashback to December 10th, 1941. Sea Tiger, part of the Asiatic Fleet stationed at Cavite, is sunk at the dock by Japanese bombers. With the Japanese rapidly advancing across the island and the only alternative being to scuttle what's left of the boat and join the holdouts at Bataan, Lt. Commander Matt Sherman and his crew work frantically to jury-rig sufficient repairs to make the run from the Philippines to Darwin, Australia where the Asiatic Fleet is regrouping with Allied forces. LTJG Nick Holden (Curtis) is a reassigned Admiral's Aide with no sea experience (well, he was on a destroyer for a couple of days before they got it worked out) who proves unexpectedly useful as the new 'Supply Officer' getting Sherman the parts he needs by humorously unscrupulous means.

Repairs are finally complete and they are ready to get underway, but the No. 1 diesel engine keeps backfiring and sending out black smoke. As the Engineering Division try to fix it, a local witch doctor comes up and starts doing some kind of ritual dance to ward off evil spirits. An annoyed Sherman tries to get him to leave when suddenly the engine starts and they are finally able to shove off. As the sub heads out to sea, the engine backfires and the witch doctor stops dancing and shakes his head, remarking, "They'll never make it."

Sherman intends to unload the nurses at Cebu but the Army officer in Command refuses to take responsibility for them as he is expecting to be overrun and engaged in guerilla operations. Nor can he help Sherman obtain the parts he needs as everything has been taken up into the hills. Lt. Holden comes up with a solution—he establishes a 'casino' up in the hills which accepts machine parts in exchange for chips, leading Sherman to note that Holden is the only man he knows who will be probably be awarded the Navy Cross at his court-martial.

As the submarine was sunk for several weeks, she desperately needs a new coat of paint to stave off rust. Holden is only able to get some of lead primer paint for the undercoat. The crew is forced to mix red and white lead, resulting in a bright pink submarine. The nurses find this amusing, while the submariners pray to God that nobody sees them on it. Before the crew can finish applying the regulation haze-gray paint, they are forced to make a quick departure under fire. They also have a dozen or so more passengers, the wives and children of the dealers at Mr. Holden's casino and a goat to provide milk for the children. Even better: two of the women are in the last stages of pregnancy.

Sherman naturally assumes that things can't possibly get worse - then they do. Tokyo Rose mocks the bright pink submarine cruising the Celebes Sea. U.S. Naval Intelligence assumes it's deliberate disinformation, leading to orders to fire on the Sea Tiger when she attempts to make contact with a destroyer group. Sherman is forced to resort to most unconventional means to prove that he is 'friend' not 'foe'.

The flashback ends with a color photo of the pink Sea Tiger steaming into Darwin Harbor. Admiral Sherman closes the log book and goes on deck to meet Commander Nick Holden, now captain of the Sea Tiger who has just said good-bye to his wife, the former Lt. Duran, and their two sons. A few moments later the Admiral's wife, the former Lt. Crandall, arrives with their four lovely daughters. She manages to rear-end his staff car and send it into a bus, which then pulls out, dragging the Admiral's car behind it by the locked fenders. He assures her it won't go far, then turn to watch as Sea Tiger shoves off for the last time, punctuated by an explosion from the No. 1 engine. Sherman shakes his head, remarking, "I guess we never did get that fixed."