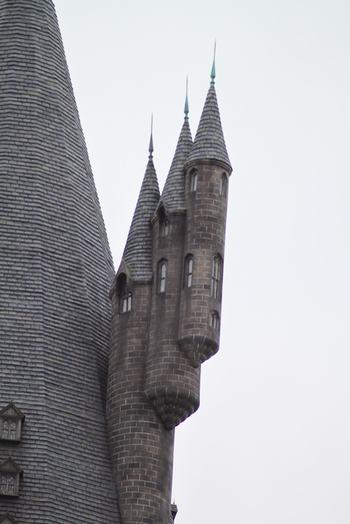 Wizard architects laugh at gravity.
In Real Life, an engineer's job is to design processes, machines or structures that perform a certain task, and perform it efficiently, reliably and safely. It's a challenging job, involving analytical thinking and mathemathics, as well as creativity — and last but not least, common sense.
Advertisement:

Not so in fiction. When you let a writer of fiction dream up a machine, odds are good that you'll end up with something that is horribly inefficient, unsafe, or just plain physically impossible.

The reasons for this vary:

If the work is set in modern times, you're supposed to ignore it, but if it is in a sci-fi or fantasy setting, it's a toss-up whether it will be ignored completely, explained as being made of Unobtainium or Applied Phlebotinum of some nature, or only working because A Wizard Did It or a Higher-Tech Species shows us how.

A very frequent cause of Awesome, but Impractical. Cool, but Inefficient is a subtrope. Related to No OSHA Compliance, as process safety is a pretty big issue for most engineers in Real Life.

See also: Artists Are Not Architects, Sci-Fi Writers Have No Sense of Scale, Square-Cube Law.