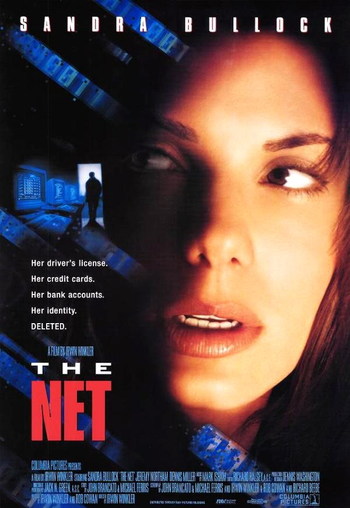 Identity theft is hell.
"Just think about it. Our whole world is sitting there on a computer. It's in the computer, everything: your, your DMV records, your, your social security, your credit cards, your medical records. It's all right there. Everyone is stored in there. It's like this little electronic shadow on each and every one of us, just, just begging for someone to screw with, and you know what? They've done it to me, and you know what? They're gonna do it to you."
— Angela Bennett
Advertisement:

The Net is a 1995 techno-thriller film starring Sandra Bullock and directed by Irwin Winkler.

Angela Bennett (Bullock) is an unassuming, nerdy computer analyst and reclusive loner who works from home, helping her company debug games and other software. She becomes embroiled in an intricate conspiracy when her co-worker sends her a disk of security software called "Gatekeeper", containing a secret backdoor into various government agencies, hospitals and any computer system Gatekeeper supposedly protects. This makes Angela a target of the Praetorians, a dangerous group of hackers who use their manipulation of everything online to kill or ruin the lives of anyone who threatens them.

Bennett becomes a wanted fugitive when her identity is replaced with that of a known criminal, her credit cards rendered null, her car stolen and her house sold without her knowledge. With everyone believing she is someone she is not, and a charming assassin on her tail, Bennett can only count on her former therapist, Dr. Alan Champion (Dennis Miller), to protect her and ensure her mother, who suffers from Alzheimer's, is safe. It will take all of her skill and wits to uncover the real identity and motives of the Praetorians and bring down the conspiracy before they have undetectable access to every major computer system.

A TV series adaptation aired on USA Network for one season (1998–99), turning the film's plot into an episodic narrative pitting runaway Angela against the Praetorians, a cyber-terrorist organization that makes her a target of the FBI by swapping her identity with one of the 10 Most Wanted List. A Direct to Video sequel (in actuality the same premise under different circumstances), The Net 2.0, was made in 2006, about a female computer analyst who gets her identity stolen while in Istanbul.