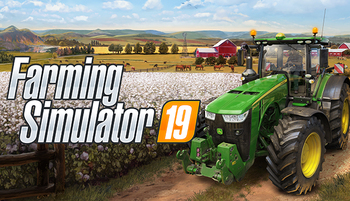 The world's #1 farming simulation game!
...Is a series of games made by Swiss developer GIANTS Software. It's a Simulation Game based around... farming.
Advertisement:

Gameplay incorporates real-world farming techniques and (mostly) real-world machinery along with mods from a dedicated fan community for extra flavor. As the series has progressed from the first (comparatively) basic instalment, more and more equipment types, crops, manufacturers and locales have been featured in each game, with DLC and the aforementioned mods adding even more variety.

Currently, there are seven games in the main series, not counting hand-held or mobile versions: